On November 5th, 2019, buzz traveled throughout the ICON community regarding the official launch of the ‘my-ID Alliance’.While information on the existence of the alliance and the upcoming event was already known beforehand, more specific details regarding who was involved and the roles they would play was still a bit of a mystery.Fortunately, The Iconist was present at the event to provide coverage for the community.

As a refresher, let’s take a look at exactly what “my-ID” is.The genesis of my-ID actually dates way back to 2016. In November that year, the following news broke:

“South Korea said Thursday it will launch a government-civilian consortium on “blockchain” within this year for joint research and pilot projects.

The Financial Services Commission (FSC) presented a roadmap for the project in a meeting of the blockchain council, joined by representatives from the financial industry.

South Korea’s 16 major banks are scheduled to set up a joint task force next Wednesday, followed by the participation of more than 20 brokerage firms here on Dec. 7, according to the FSC.”

“On December 7, 21 financial institutions and five blockchain companies signed a memorandum of understanding to develop collaborative projects and share all the expertise available with blockchain technology in the framework of the creation of South Korea’s first distributed ledger consortium.

The consortium led by the Korea Financial Investment Association (KOFIA) is part of an initiative of the South Korea Financial Services Commission (FSC), a state agency that is committed to block innovation through the creation of a laboratory of ideas where members can investigate the use cases of the blockchain directed by the information technology committee of KOFIA. KOFIA is a non-profit organization that since 2009 has been dedicated to self-regulation, market management and the improvement of the investment culture.”

At this point, we have the Financial Services Commission — a government run agency — encouraging the development of blockchain technology, with the Korea Financial Investment Association — a non-profit whose members span nearly the entire Korean financial industry.

The following year, KOFIA announced that:

The consortium is hoping to widen the adoption of the Chain ID across the entire financial investment industry within this year, and introduce it to other financial industries such as banking, insurance and credit card next year.”

“Answering to the needs of a new method of personal authentication, theloop has joined the Korea Financial Investment Blockchain Consortium as a technical partner to develop CHAIN ID.”

This was the first declaration that ICONLOOP — the private chain partner of ICON — was the entity charged with implementing the breakthrough authentication technology for KOFIA and it’s participating members.If you’re unaware of just what ChainID does — here is a quote from the ICON announcement:

To solve the problem of data integrity, smart contracts based on theloop’s proprietary blockchain engine, loopchain, were used to create CHAIN ID. Smart contracts are self-executing contracts with the terms of an agreement written directly into lines of code. Smart contracts ensure the implementation of the network rules, making the data secure and complete, while also lowering the risk of fraud or malicious alterations.

CHAIN ID issues a joint certificate through the consensus of the nodes (participants) in the network. The joint certificate is already authenticated through the consensus of the nodes and can be used freely throughout the network without any additional authentication. The smart contracts will guarantee the integrity of the data, ensuring that the certificate is trustworthy and without the risk of being altered.

The information and status of the certificate is shared among the nodes in real-time so that all the participants will have the same information. By all the nodes having the same data, CHAIN ID can prevent single points of failure, such as hacking attempts that may happen in centralized network environments.”

I’ve spent most of this article discussing CHAIN ID. What does that have to do with “my-ID”?

This past July, we learned the following:

Recently, the Financial Services Commission (FSC), South Korean government’s top financial regulator, announced the inclusion of ICONLOOP’s ‘my-ID’ service into the ‘Innovative Financial Services and Regulations Sandbox’ created under the Financial Innovation Support Special Law. ‘my-ID’, a digital ID service that can be utilized for untact (non-face-to-face verification) openings of banking accounts, is expected to be configured in a ‘self-sovereign’ manner, eliminating the risk of personal information leaks. As 18 different companies, including ICONLOOP and others such as manufacturers, banks, stock/securities firms, insurance companies, e-commerce companies, have expressed their participation in the Innovative Financial Service project, the sandbox inclusion is expected to act as a stimulus towards mass adoption.

While there was some confusion over why it seemed as though there were now two separate technologies, Min Kim helped clear up some of that confusion in a tweet:

The way I’ve viewed this is that CHAIN ID was the label for the raw technology, while my-ID is the more formalized and branded presentation of the technology.

Leading up to the launch of the my-ID Alliance, the following was in place:

So now let’s look at the official my-ID Alliance launch:

ICONLOOP’s MyID Alliance has officially launched with 39 partners in the sectors of finance, securities, e-commerce and manufacturing.

Their vision? Implement a trusted decentralized ID (DID) ecosystem through ICONLOOP’s proprietary solution, MyID. Their mission is threefold:

Business Focused: Expand the business based on trust authentified by financial sector

Glocalization: Glocalize MyID-based business model, connect and expand the IDs of countries around the world

Here is the graphic that The Iconist posted revealing the various partners within the alliance: 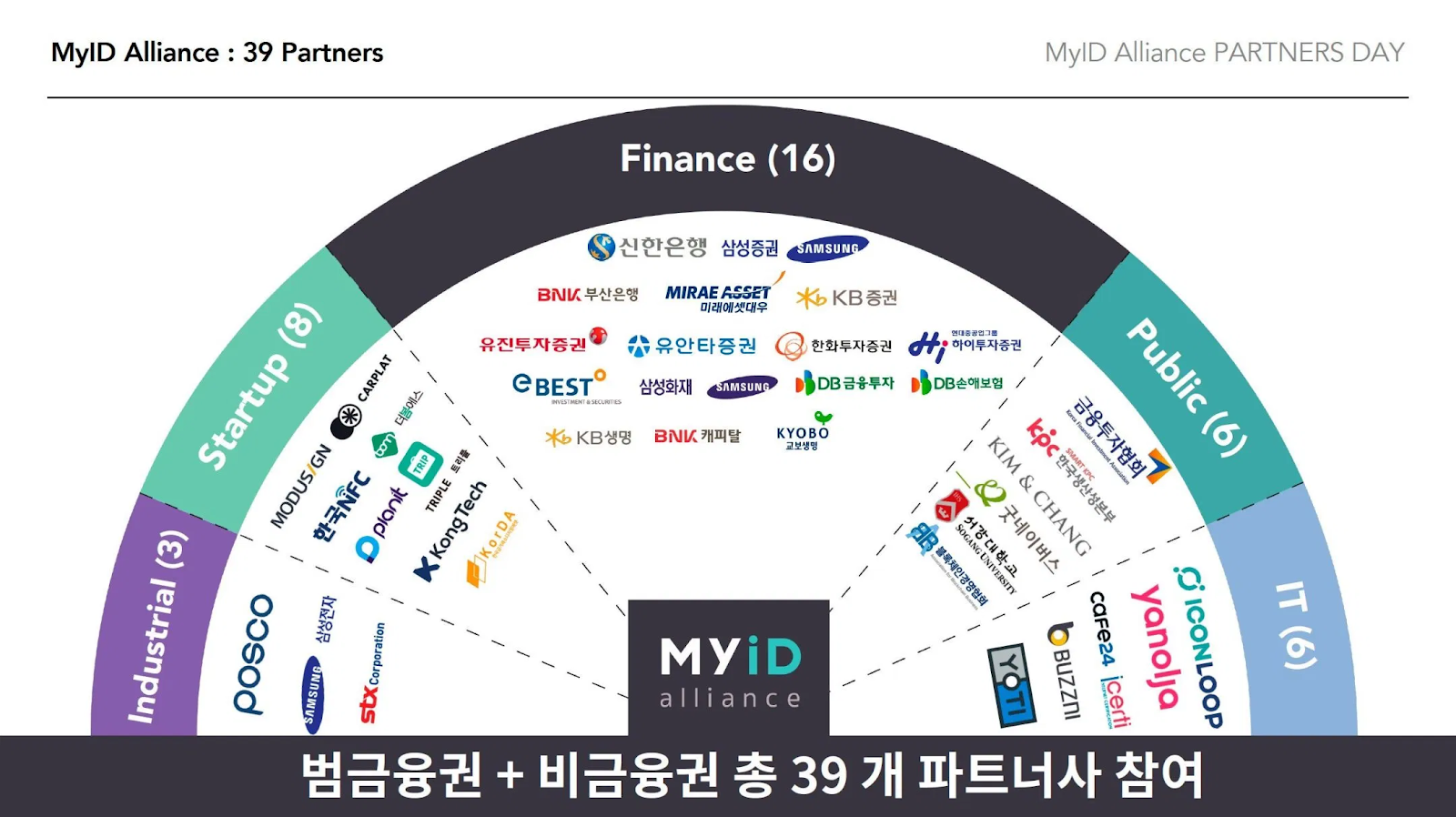 These partners have primarily been placed into two baskets: ecosystem partners and growth partners.

“Ecosystem partners, all from the financial sector, are those who will be involved with verifying and issuing identities. “These companies will not only issue identity but also apply the issued MyID directly to our services,” said an ICONLOOP spokesperson. When MyID is released sometime in the first half of 2020, it will be introduced to ecosystem partners first.”

These partners are responsible for generating and issuing my-ID. In order to comply with the stringent regulations the Korean government has likely placed on this service in order to gain approval, ICONLOOP can’t just have random individuals or organizations issuing credentials. They have to rely on trusted and credible institutions. Included among this list are Samsung Securities, Mirae Asset Financial Group, KB Asset Management, and other similar firms. I will be writing a separate article breaking down all the alliance members, but in the meantime, just be aware that, collectively, the alliance’s ecosystem partners are the backbone of the financial industry in Korea. It’s the U.S. equivalent of JP Morgan Chase, Bank of America, Goldman Sachs, and others joining forces.

“Growth partners represent future use cases for MyID. In other words, these are the companies that will leverage MyID once the ID is verified and issued by the above ecosystem partners.”

In a sense, these are the entities that will be “using” my-ID, most likely by using it as a credential for their own existing clients, or allowing customers to access their services with a my-ID credential. Included among this group are Samsung Fire and Marine Insurance, Kyobo Life Insurance Company, DB Insurance, and a number of other companies and startups from various industries.

Like so many other announcements focused on ICONLOOP, the inevitable reaction from the community is “How will this use ICX?”Here is a tweet from Dr. Ben Lee, ICON’s cryptoeconomist:

Let’s break down a specific example for a moment.

It’s one thing to have a decentralized identification; it’s another to actually use it.

Take the example of Yanolja for instance that Dr. Lee provides in his tweet. Here is a quote from The Iconist:

“Jongyoon Kim, CEO of Yanolja, a hotel booking app, said, “In many occasions, our customers use different login information when they use our service. With MyID, we can avoid this.” Instead of waiting in long queues at check-in, MyID could verify client identities much more quickly and thus improve customer experiences.”

To my knowledge, the hotel industry is not exactly rife with cases of fraudulent identity. Accordingly, investing in identification on it’s own doesn’t seem like a practical use of resources. However, integrating that identification with your overall infrastructure to improve the customer experience and reduce costs would be a practical use.

Let’s dive a bit deeper. Let’s say you book a room through Yanolja. On your check-in day, you arrive, and instead of waiting in a long line, you simply scan your my-ID (the same one you used to book your reservation) in one of the check-in portals. my-ID then interacts with the hotel’s internal blockchain system (via the ICON public chain) to verify the reservation in an instant. Once verified, the portal gives you your room number and any other helpful information. You then take the elevator to your room, and enter your room with your my-ID (again, using the ICON public chain to do so).

Meanwhile, when you booked your room with my-ID, instead of digging for a credit card and typing in your number, you instead checked a box saying “Allow hotel to access payment via my-ID.” Now, when you check-in, my-ID automatically contacts your bank (via the public chain), which then automatically transfers payment to the hotel.

Is this exactly how my-ID will be used? It’s hard to tell - but it’s certainly feasible. There may be other features I haven’t even considered in the above example.

This is one possible use case. This alliance has launched with 39 partners, with the possibility of many more coming on board. The odds of at least two of them recognizing a need for using the public chain to connect seem significant. The odds of many of them connecting are also very high in my mind.

If these companies were inclined to simply utilize a standalone identification service for their own internal purposes, I don’t think they’d go through the trouble of forming or joining an alliance. The fact that this effort is underway indicates willingness to work together and a recognition that connectivity is what will provide the maximum leverage for this new technology.

Overall, the value of a decentralized identification isn’t just it’s security - it’s the ability to significantly reduce friction - in customer service, in payments, in costs. In order to so, these entities will need hyperconnectivity - exactly what the ICON public chain can provide.

Subscribe to RHIZOME Wire, our weekly newsletter with sharp and original analysis of the ICON ecosystem along with news from the blockchain industry.

A few of our contributions to the ICON ecosystem.